Students Learn Life Lessons from One Another 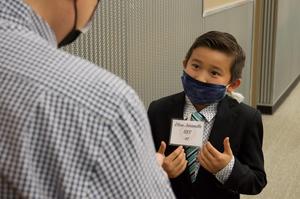 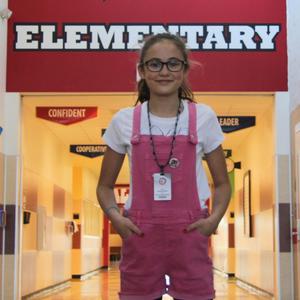 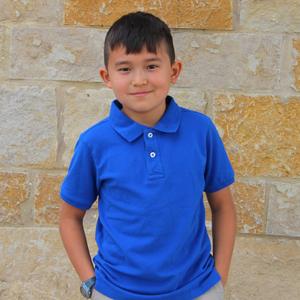 Teachers and parents are always looking for those teachable moments to share with their children from daily interactions and experiences to learning how to win and lose with dignity and grace. One of those moments took place during the finals of this year's Comal Shake competition.

March 8, 2021 - Some moments teach students more than any lesson plan or book ever could. One such moment happened between two elementary students following the district-wide Comal Shake competition in January.

When Ethan Jaramillo, a third-grade student from Indian Springs Elementary, learned that he did not win the competition, he tried his best to hold back his tears of disappointment. Visibly upset, the young competitor wiped away the tears and took his mother’s advice to congratulate the winner and ask her for some tips on how he could improve his skills for next year.

No stranger to disappointment, this year’s winner, Lyla Harrington, a fifth-grade student from Oak Creek Elementary (OCES), had competed in Comal Shake for the last three years, falling short every time of the coveted title. This year, she was thinking about Jaramillo when she heard her name called out as the winner. She recognized his sadness and disappointment when he wasn’t chosen for a tie-breaking round, and she also had noticed how well he had performed in the previous final rounds.

“I was thinking about how awesome he had done,” Harrington said. “I thought he had done so much better than I would have done when I was in the third grade. I just thought that he was fantastic.”

When Jaramillo made is his way over to congratulate her, Harrington remembered how she felt in the years prior to this one.

“There was no one there to tell me, ‘Hey, you’ve got next year. You’re fine.’ When I saw him, I knew that he needed some encouragement, and I knew that I could give it to him. So, I did, and I was really glad that I did,” Harrington said.

Others noticed this exchange as well including Carla Schumann, the district’s director of fine arts who organizes the annual competition.

“This was a life lesson moment for not only the two students but for all of us witnessing it,” Schumann said. “Both students exemplified leadership qualities and the character traits we strive to teach them. I was amazed by the kindness and intuition shown by our champion and equally impressed by the resilience and fortitude of the younger competitor.”

Winning the Comal Shake competition was the perfect way to cap off Harrington’s elementary years. She has taken full advantage of everything at OCES. While in the third grade, she planned and organized a biweekly reading time for herself and friends to read to kindergarten students. She hopes to be an actor or architect one day and enjoys art, music and being creative.

Jaramillo is taking Harrington’s advice and sharpening his skills for next year’s competition including listening and following a conversation instead of changing its course. He encourages other students to never give up on their goals too.

“Persevere your way through,” Jaramillo said. “You should try, try and try again. The definition of foolishness is doing the exact same thing over and over again and expecting a different result.”

Comal Shake is a district-wide competition for elementary students to help them develop their interpersonal skills including carrying on a conversation with confidence and poise. This year marked the competition’s seventh year.

-Third-grade student Ethan Jaramillo from Indian Springs Elementary competed in the final round of this year’s Comal Shake event.

-Jaramillo is sharpening his conversational skills for next year’s Comal Shake competition.