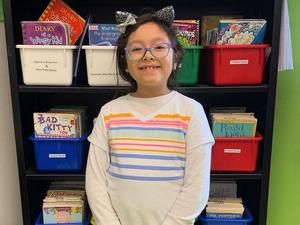 While many student competitions have been canceled due to the coronavirus, the hard work and success of students who qualified for these competitions should still be celebrated. Here's one such student.

After winning her campus spelling bee for the second year in a row, fourth-grade student Sara Herrera qualified for the San Antonio Express-News 67th Annual Regional Spelling Bee this year. The competition was scheduled for March 21, but was postponed due to the coronavirus.

Herrera won the Indian Springs Elementary spelling bee with the word, “parentage.” After her campus win, she spent two weeks studying for an online spelling and vocabulary test and earned a score that advanced her to the regional bee.

This is quite a feat with competition at the campus level pretty steep. The spelling bee at Indian Springs Elementary began with a written test for all third through fifth grade students. The written test qualified 84 students for a second written test with 21 advancing to the campus oral spelling bee. Those 21 students took turns spelling words aloud in front of an audience of parents and teachers for 50 rounds before Herrera was the last one standing.

-Fourth-grade student Sara Herrera qualified for the regional spelling bee after winning her campus spelling bee for the second year in a row.