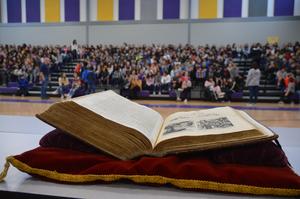 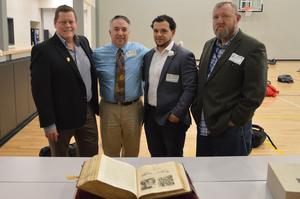 All history buffs will be jealous when they see what American artifact graced the halls of Pieper Ranch Middle School recently - the original, authentic Bible used in the country's very first Presidential Inauguration.

Pieper Ranch Middle School became the first school in Texas to play host to the George Washington Inaugural Bible on Friday, Feb. 28. Accompanied by two armed guards as well as tour guides, the Bible is considered one of the country’s most important artifacts.

“This is one of the most cherished artifacts of our country’s history, and I’m excited to share it with our students,” said Marty Bartlett, a Comal ISD Board of Trustee, and the reason for the visit. Bartlett was sworn in as the chief executive officer and president of the Alzafar Shriners on Saturday, Feb. 29, and received special permission to use the George Washington Inaugural Bible for his ceremony.

“This is the first time that a Texas school has hosted the Bible, and only the second time that the Bible has been in Texas,” Bartlett said. “It was a great honor to be sworn in as the head of the Shriners with the George Washington Inaugural Bible. Remembering how our founding fathers used the same Bible over 250 years ago instilled in me a solemn commitment to also serve my community to the greatest extent possible.”

The significance of the visit was not lost on history teachers and administrators at PRMS as well, who explained the historic significance to the 480 sixth grade students during an assembly in the school’s gymnasium. Campus instructional coach and former history teacher Kim Poorman, connected a few of George Washington’s precedents as the first President of the United States to the class’ role of establishing precedents in the new middle school which opened last year.

Poorman began by sharing a few facts about Washington. He was elected unanimously to the presidency; he began the rituals of an inauguration ceremony such as laying his hand on a Bible; and he created the first cabinet delegating an adviser or person in charge of finance, foreign affairs and domestic affairs; the secretary of the treasury, secretary of defense and secretary of state.

“We are setting precedents in our school as well,” Poorman said to the class.

The Vipers also heard from one of the tour guides with the Grand Lodge of New York who accompanied the Bible to PRMS, Kenneth Ginn, who explained that the Bible is owned by St. John’s Lodge No. 1 of the Ancient York Masons.

Many believe that the Bible was an afterthought of Washington’s inauguration which occurred on April 30, 1789, on the balcony of New York City’s Federal Hall, the nation’s first Capitol building. The story that is often told says that a marshal for the inauguration who also served as the grand master for the lodge ran back to the lodge for the Bible when Washington realized that one was needed for the ceremony. In addition, it is said that it was opened randomly to Genesis 49.

Ginn and other historians, however, do not buy that story. Those who have studied Washington say that he was very strategic and detail-oriented and would never have left something like the Bible to chance.

The George Washington Inaugural Bible is offered to every president for use during a presidential inauguration. It has only been used by four other presidents including Warren G. Harding, Dwight D. Eisenhower, Jimmy Carter and George H. W. Bush. George W. Bush requested to use it as well, but bad weather on the day of his inauguration did not allow it. Instead, he said a prayer over the Bible indoors after the ceremony.

Today, the George Washington Inaugural Bible is stored and on display at Federal Hall in New York City.

Watch a short video from the visit here.

-The George Washington Inaugural Bible was displayed during an assembly at Pieper Ranch Middle School on Feb. 28.